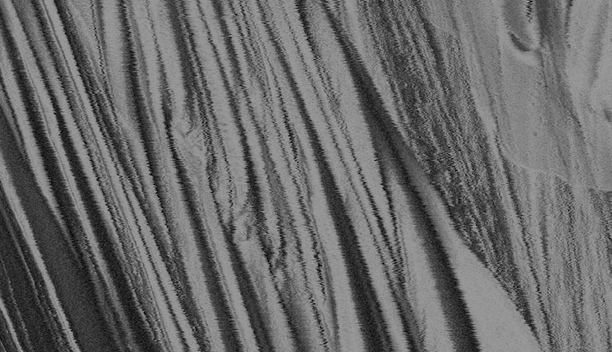 The Voice of the Universe – A Brief History of Drone

Since the beginning of time, the universe has vibrated and sent out a key tone, an incomprehensible growling.

Already in the imagination of the ancient Greeks, the luminaries moved on transparent spheres, grinding against each other and thereby filling space with an eternal chord, the “symphōnía.” And for American physicist Brian Greene, the assumption that everything that exists is filled with a constant hum, wonderfully ties in with string theory. After all, the strings that make up the universe are swinging. From this vantage point, the cosmos is pure music. And drones are the voice of the universe. Even the first thing a human being ever listens to is a drone. A never-ending static caused by blood circulation and breathing: the soundtrack of the womb.

Static undertones and tone clusters whose harmony or rhythm changes only slightly are omnipresent. Drones provide an eternally exceptional phenomenon in music, too. They are, so to speak, as old as music itself. Nowadays, a whole set of pop music genres and sub-genres depend on them: drone ambient, drone metal, doom drone, new age drone. And yet, this all-permeating sound is highly divisive. Tones or chords without breaks, without melodies, arrangements or development. Really? Sounds that are almost fully stripped of everything that sets music apart from pure noise, and that only alter back and forth between dissonance and consonance? For some, this is pure boredom. For others, it’s neither exciting nor boring, but a spiritual non-desiring, which relentlessly vibrates its way into the listener’s subconscious. A blank audio canvas open to everyone’s interpretation. An all-encompassing, universal principle.

God is Sound / Sound is God

Drones have existed in many corners of the world. They seldom resonated on their own but for the most part they were embedded into instrumental arrangements. For example, the “burden tone” served as the backbone to many folk music traditions, from Southern Italy to Scandinavia. And even in the middle ages, Europe and Byzantium sang over a foundation of static tones. Back then, larger cities in the Christian world hosted huge entertainment venues that showcased psychedelic light shows backed by endless drones and anesthetic fog: cathedrals, where choirs and organ players pushed their audience into ecstasy with what was then the loudest music imaginable, resonating from the walls with lots of heavy overtones.

But even in their purest form, drones connected people with a vibrating universe from early on. In many European places, they came out of the frenetic hurdy-gurdy; in the Scottish Highlands, from the mighty Pibroch bagpipes; while in north Australia, they got coaxed out of a didgeridoo. In the classical music of South-East and North India, drones came out of the tambura, which was built solely for that reason. “Nada Brahma,” that’s how you sum up the all-encompassing, universal drone in India, because it can mean both, “God is Sound,” but also, “Sound is God.”

In Western modernity, however, the man-made drone has only recently come to prominence. Despite efforts by French painter and performance artist Yves Klein, who in 1949 created “The Monotone-Silence Symphony,” an orchestral piece whose first part consisted of an unvarying 20-minute tone, it was only in 1958 that American avant-garde composer La Monte Young wrote the first piece completely made up of static chords and steady tones without any melody or rhythm, “Trio for Strings.” It is considered the first modern drone piece, and a building block of today’s dronology.

Young was only getting started: four years later, he and his fellow artist Marian Zazeela founded the Theatre of Eternal Music, a multimedia performance troupe whose impact on the spreading of the drone gospel proved to be peerless. In the ’60s and ’70s, members of the group included violinist Tony Conrad, viola player John Cale, trumpeter Jon Hassell as well as Terry Riley on organ and vocals. Although the Theatre of Eternal Music did not put out any music during their active years, they massively influenced the drone-heavy works of composers like Pauline Oliveros, Charlemagne Palestine and Phill Niblock. It was here that John Cale discovered drones and took them over to The Velvet Underground, who incorporated the technique on their 1966 debut EP Loop, in form of a buzzing, drifting guitar feedback. Down the line, Velvet Underground’s Lou Reed took public awareness of drone excursions to new heights on his 1975 double LP Metal Machine. Those recordings might have been essentially more noise than drone, but were still very drone-like in their concentrated one-dimensionality.

As for the mainstream, the drone saw the light of day on November 27th, 1964. On this day, the Beatles released their single “I Feel Fine,” which opened with two seconds worth of drone feedback from John Lennon’s guitar. A brief appearance. Just two years later, the Beatles took a bigger chance when they featured a set of heavily-droning sitars on their 7th studio album Revolver. They came courtesy of Indian musician Ravi Shankar, who had been releasing sitar-based ragas in the global North since the ’50s.

In Germany, the universal drone hummed to prominence in the ’60s and early ’70s via a group of young musicians that embarked on a quest to find alternatives to the dominant Anglo-American tendencies in pop music. Their experiments later gained notoriety under names like Krautrock or kosmische musik. Kraftwerk, for instance, filled up a couple of songs from their self-titled 1970 debut album with long, static chords and tones. Klaus Schulze’s solo debut Irrlicht consisted almost entirely of organ drones. And Schulze’s former band, Tangerine Dream, released an early ambient-drone record called Zeit in the same year.

While Germans in the ’70s mostly generated their drones from organs, synths and sometimes flutes, post-punk, dream-pop and shoegaze bands returned to the guitar feedback of The Velvet Underground. Stalwarts such as Cocteau Twins, My Bloody Valentine, Slowdive, The Jesus and Mary Chain, but also Sonic Youth and Coil, experimented with extremely loud drones as a tool to overpower and transport their audiences. Spacemen 3 even used a text by the pioneering La Monte Young in the liner notes to their 1990 live drone record Dreamweapon.

Later in that decade, Seattle-based band Earth tested out the obvious shortcut between metal and drone-power; drone metal differentiated into its own genre, whose undisputed kings, Sunn O))), emerged from Seattle in 1998. And while experimental guitarists like Rafael Toral, Christian Fennesz or Oren Ambarchi honored the tradition of coaxing drones out of six strings, electronic music artist like Thomas Köner and Wolfgang Voigt (as Gas) explored German drone-science further.

Bore Me, Bore Me, Do It Again

Listening to those musicians and their offspring today, it appears that there was something inherently provocative, almost obscene to their approach. In times of instant gratification and spectacular turns, losing virtually all changes seems like a strong statement. John Cage said that if you do something and it’s boring, then you should do it again until it becomes interesting. Cage, of course, took this to extremes: “Organ²/ASLSP”—As Slow As Possible—started being performed in 2001 in the church of St. Burchardi in the Eastern-German town of Halberstadt. The performance will end in 2640, a time-lapse droning on for over half a millenium.

Complex drones can be full of micro-tonal events, tiny structures and shifts, only audible to those who come equipped with enough Zen—or, at least, time—to fully immerse themselves in it. That which seemingly sounds like the same thing over and over again can open up into different layers and elevations, full of complexity and depth. This way, a drone can allow the attentive listener to stay in the exact moment, while simultaneously hint at deeper layers and hidden, non-tangible sensations; the sublime and numinous.

This also works well with heavy, distorted drones that dissect tones into an entropic noise. For Georges Bataille the sacred meant a total dissolution of the self, but at the same time also a feeling of nothingness and chaos. Drones can mirror both sides of this experience of the holy, and evoke the full spectrum of emotions, ranging from meditative calmness to relieved jest and pure fear. In any case, drones change little of the original piece of music, but so much more in terms of the audience’s actual act of listening.

The listeners are then wired to eternity. The sufi Hazrat Inayat Khan, who first traveled to New York in 1910, writes in his classic book The Mysticism of Music, Sound and Word: “Every being with life comes to the surface and again returns whence it came, as each note has its return to the ocean of sound.“ The drone is the primeval soup. The point from which all melody stems from—and eventually returns to.