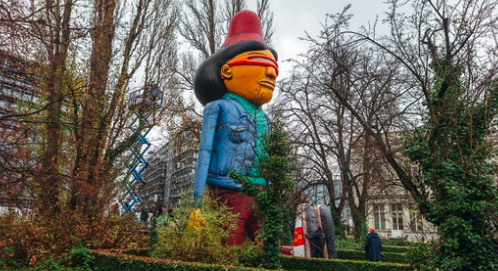 Standing at more than the height of a man, the hut moves slowly into the spotlight. According to a popular Russian fairy tale, the witch Baba Yaga lies in wait inside her dwelling, which is held up by scrawny chicken legs. But here, the dwelling rocks and turns with the dancers who spin around it using objects to make noises on its walls. Then the giant object itself begins to play music: there is a harp inside whose strings are being plucked by robotic arms. Hence, onstage at this rehearsal in the historic hall of Hamburger Bahnhof, Baba Yaga’s hut is many things at once: an art object that makes music and moves in rhythm.

This dancing, music-making work of art symbolically represents what will be happening here at the museum during the more or less 50 performances from April to June 2019: “Flying Pictures” combines urban dance, contemporary classical music and street art in an entirely new sort of Gesamtkunstwerk – a total work of art that eloquently weaves together many different artistic disciplines. “Everyone involved brings something else to the table,” says Vartan Bassil, stage and artistic director of “Flying Pictures,” “and together we create something that has never existed before.” Bassil, born in Lebanon and raised in Berlin’s Wedding district, is one of the founding members and artistic director of breakdance group the Flying Steps. Yet, they are far more than just a breakdance group: They are one of the most successful urban dance crews ever, worldwide.

Udo Kittelmann, head of the Nationalgalerie Berlin, which encompasses five museums (including Hamburger Bahnhof – Museum für Gegenwart/Museum for Contemporary Art), had worked with Bassil and his crew before, on the 2010 project “Flying Bach,” which mixed the baroque composer’s works with breakdance. So when, around two years ago, the team approached him again about their current collaboration, Kittelmann was immediately enthusiastic about it. “The question is: How can I bring together the most disparate of art forms in a clever and engaging way so that the result is truly entertaining. I have no doubt that it worked here.”

In “Pictures at an Exhibition,” the Russian composer Modest Mussorgsky (1839–81) has contemplated ten paintings and drawings by the Russian painter Viktor Hartmann. He asked himself how the images would sound if they were music. “Flying Pictures” essentially flips the same question around to ask what these compositions would look like if transformed back into visual movements with urban and contemporary dance as well as street art. Dancers, in addition to figures and decorative elements, stand in for Mussorgsky’s first-person narrator, observed from many angles as they perform on a multidimensional stage. This stage is located in the middle of the historic hall of Hamburger Bahnhof, which houses one of the world’s largest and most important contemporary art collections. Through this interdisciplinary cooperation, the public institution is underscoring its identity as an experimental museum of the present. “Many people will end up coming to see the spectacle who might not have made it to the museum otherwise,” says Kittelmann.

By day, museum visitors can see the colourful mythical beings and dream figures; by night, these same figures come to life during the performances. These figures are the work of the Brazilian street artist duo Osgemeos – identical twin brothers Gustavo and Otavio Pandolfo – born in 1974 in São Paolo (os gemeos is Portuguese for “the twins”). They both work in interdisciplinary formats and make site-specific installations, performances and videos. “Our pieces could fall into many genres,” explain Osgemeos, who don’t want to be quoted as individuals, “but we haven’t ever made a show quite like this one – a true spectacle.”

To get the cooperation started, project initiator Bassil and one of his Flying Steps partners first visited Osgemeos in São Paolo for two days in order to get a closer look at their pieces. Then, approximately a year ago, Osgemeos got to work. There were video conferences with the other participants. Many e-mails to do with music recordings, choreographic designs and preliminary figure sketches crossed back and forth between Brazil and Germany. Most of the fantastical figures came into being in São Paulo, which the Osgemeos transported via a whole lot of excess baggage to Berlin, where they completed the job. They spent 12 hours a day pottering about in paint-smeared overalls and tracksuits in a studio-cum-workshop located in an industrial area in northern Berlin.

Here, Osgemeos assembled the giant installation, made up from 100 brilliantly coloured loudspeakers to blast the music of “Flying Pictures/Pictures at an Exhibition” throughout Hamburger Bahnhof. Berlin-based composers Vivan and Ketan Bhatti wrote the pieces; they like to work in the grey areas between new and classical music, jazz and urban music such as hip-hop. As a result, over the years, they have produced a very diverse body of compositions from contemporary chamber music and experimental pieces to theatre music and film scores. The brothers have been cooperating with the Flying Steps for ten years.

Vivan and Ketan Bhatti adapted Mussorgsky’s original music for “Flying Pictures.” Ketan Bhatti describes the composers’ approach: “How does it sound overwritten today? We see it as a palimpsest that allows the original to show through time and again.” The brothers have the eight-person ensemble, which performs the music live every night, play their instruments in untraditional ways – for example, when the cello strings are struck with the bow, the violins break out into a hip-hop beat or suddenly all the musicians are clapping together in rhythm. Then, last but by no means least, a beatboxer who can produce the rhythms only using his mouth, rounds off the acoustic ensemble.

The Bhatti brothers and the ensemble rehearsed their new compositions in an auditorium at the Flying Steps Academy, the largest school for urban dance styles in Europe, in the Kreuzberg district of Berlin. Grand pianos, woodwind instruments or a drum kit were set up in the places where normally young people would be practising urban dance. Vivan, the older of the Bhatti brothers, conducted while Ketan stood behind him and listened carefully or traipsed restlessly about the room, now gently correcting one musician, now sticking a bit of insulating material into a drum. The composers worked closely with the professional musicians – all trained in new music – to create complex passages in which they were able to precisely coordinate the musicians, dancers and the entry of the street-art figures.

Meanwhile, the dance crew practised in the basement of the Flying Steps Academy. Power-training exercise equipment and weight benches littered the floor, and behind that, a wide wooden door opened up to a small room with a reinforced cement ceiling, a black rubber floor and a mirrored wall. An international team of eight dancers was formed especially for “Flying Pictures”; the working language is English. All well-versed in a variety of dance genres, from classical ballet to breakdance-style popping, thus the dancers have an interdisciplinary way of working, even on a small scale. In the practice room, the head choreographer Benny Kimoto from the Flying Steps worked out their common features in long rehearsals and thus, as he puts it, built up “a lot of positive human energy.”

The team is bringing all of this – the figures, the music, the dance, the energy – to the immense hall of Hamburger Bahnhof. “It is a fantastic place – and we could not have done with anything smaller. We needed that much space to give the dance, the art and the music an appropriately sized stage,” says director Vartan Bassil. Udo Kittelmann, who opened his doors to “Flying Pictures,” adds: “People keep asking me if I think the project is going to be a success – but it already is a success because we have succeeded in working together so happily.”