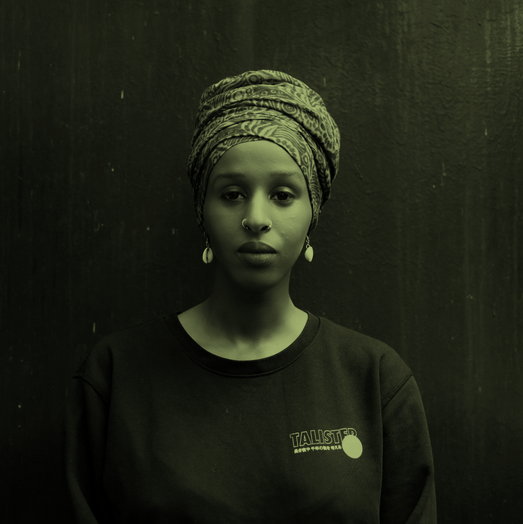 Portrait: The image she creates of herself

Between Quran and club culture: Somali-Ethiopian artist Hibo Elmi, hailing from Kampala, Uganda, explores questions of identity, origin, and social freedom. She has three artistic contributions planned for the Monheim Triennale: a concert performance, a DJ set, and a poetry reading.

Hibo Elmi believes in her roots. They are strong and rock solid, she says. If she were a tree, her roots would thrive in the humid green bush surrounding the Ugandan capital Kampala as well as on the cool rainy plateau of Addis Ababa in Ethiopia or in the arid Somali coastal metropolis of Mogadishu. Very different climates, but she only ever grows bigger and stronger. And she freely extends her branches in any direction that takes her interest. She can because of her strong roots.

Across Europe, until now, multidisciplinary artist Hibo Elmi has mainly been active as DJ with her stage name Hibotep. But Elmi is also a filmmaker, fashion designer, installation artist, rapper, and music producer. She was born in 1992 as daughter to Somali refugees in the Ethiopian capital Addis Ababa. She embodies digital culture, high-energy and avant-garde electronic music as well as Kampala’s party scene, the city she currently lives in, with the great ancient cultural traditions of Somalia and Ethiopia, where people have been writing highly complex music and equally complex poetry for thousands of years. As a Muslim woman, she is both devout and free-spirited. So the cultural nomad Hibo Elmi walks between Western culture, Ugandan culture, Islam, club culture and Somali culture. ‘Everything gets mixed together!’ Elmi stresses. There are no contradictions for her.

However, it is precisely the contrast and friction between those different cultures in her life from which she draws her creative energy. Her topics are: What is origin? What leads to identity? What it is made of? How does it transform? And how to set yourself free with it. Her contribution to the Monheim Triennale also sheds light on these questions in regard to identity policies from three different angels, and in three disciplines: concert performance, DJ set and poetry reading.

Elmi does not adhere to any images others have of her or for her. She only follows the image she creates of herself. Her mother has taught her how to bring together cultures that are allegedly contradictory, but definitely different. ‚I come from a very strict and conservative culture,‘ Elmi says, ‚but my mother was rather liberal-minded and taught me to define my own identity regardless of tribalism and extremism.‘

After her parents fled Somalia to the capital Addis Ababa in neighbouring Ethiopia in order to escape the civil war that had been raging since 1991, all they had left from their old homeland was a box full of music tapes with Somali folk song hits. These tapes shaped Hibo Elmi’s and her twin sister Hoden’s childhood when their mother would listen to them in the kitchen by herself or together with friends. ‘Music is my mother’s voice,’ says Elmi.

At her home, Hibo was soon playing music for friends and family members, acting as a living room DJ. But it wasn’t until 2012 when she visited her twin sister studying environmental science in Kampala, Uganda, that Hibo really became a DJ. She had been an outsider in Addis, hanging out with other migrants who also did not fit into the strict Christian Orthodox and rather conservative culture of the Ethiopian capital. In addition, there was racism and prejudice towards the Somalis who had fled and who were also religiously stigmatised as Muslims.

In Kampala, however, bright green and tropically humid, Elmi felt accepted by many people for the first time. ‚This place where almost everyone calls me ’sister‘ really welcomed me,’ she recounts. She ended up staying in that city of 1.5 million people and started making music with her twin sister in underground bars and at warehouse parties under the DJ names Hibotep or Houdini. Club ONE54 became the sisters‘ home base, where they hosted their own event series with exclusively female DJs, along with friends like Catu Diosis, queer feminist Kampire Bahana and legendary DJ veteran DJ Rachael, as well as film evenings, experimental noise concerts and reggae parties.

A place for freaks and weirdos

This is where the sisters met the organisers of the Nyege Nyege festival and the record label by the same name and became part of their following. The Nyege Nyege platform is responsible for a wave of new electronic music from all over East Africa, created not only in Kampala but also hailing from Nairobi, Kenya, or Dar es Salaam, Tanzania, among others. In Kampala, Nyege-Nyege parties are also a safe space for the city’s LGBTQI+ community and for others who do not fit conventional gender stereotypes. And the same goes for all others who don’t fit into prevailing norms: the city’s freaks, and weirdos. ‘We want the same thing: we want to provide a safe space for any outsider in Kampala,’ says Elmi.

But even here, Hibo Elmi is intriguingly different on stage. Her face, contoured by bright lipstick and nose ring, is then framed by a headscarf. Not a real Muslim hijab, more like a type of turban. ‚I used to wear classic headscarves,‘ she remarks, ‚but with respect for Islam and the fact that I would be representing an entire religion, I didn’t want to go to clubs dancing my butt off like that.’ The turban, she explains, is more neutral and nevertheless serves its purpose. ‘I’m not afraid to show myself the way I am, I still cover my hair, I still believe in Islam, but in my own way.‘

Elmi calls it a ‚misinterpreted version of the Quran‘ that life must always be very strict and serious. ‚My mother was a devout Muslim – and she managed to show us religion as something beautiful and enriching, not something ugly and threatening. It’s a personal matter between God and each person, she used to say.‘ Elmi has moulded this attitude into her fictional character ‚Ninjabi‘. The portmanteau word refers to a woman who wears a hijab yet moves around dangerously and freely like a cool masked ninja all the same. With no fear of what others might think. Instead, smoking and swearing as she pleases. Elmi grins when she talks about this idea.

A virtual utopia for Monheim

Hibo Elmi’s planned contribution for the Monheim Triennale is just as multidimensional, complex, and elusive of simple categories as the artist herself. She wants to create a virtual utopia, a strange place where people can see what she feels and perceives, the images in her head, her ideas.

Elmi’s contribution to the festival comprises three parts. First is her live concert performance entitled ‚Decoding Identity‘ which fuses sounds from her Muslim-Somali background with electronic music. The result is a dark psychedelic sound which, according to Elmi, is intended to provide ‚a modern perspective on spirituality‘. She collaborates with Indian textile artist Sarah Naqvi (born in 1996), whose artwork deals with religious and social stigmatisation and possible interventions, including the oppression of women in many conservative societies.

In her second contribution, Hibo Elmi aka DJ Hibotep will present a DJ set with her sister Hoden aka DJ Houdini, practising wordless communication between twins, as she calls it. The two will be freely improvising as DJs and actually play off opposing musical styles amongst each other. For example, DJ Hibotep likes to combine those old Somali folk songs from her childhood with raw drum computer beats of the dark rap genre trap. Elmi also loves to recontextualise musical genres when she successively plays, for example, techno, Tanzanian-Muslim taarab, British grime hip-hop and South African electronic music Gqom. She challenges herself and her audience with such crass mixtures. ‘Besides,’ she adds, ‘my music genres are like children to me: I love them all, even though they are very different.’

Hibo Elmi’s third contribution will be a poem reading, all written by her in Somali, her childhood language. There is an ancient poetry tradition in the Horn of Africa, which includes Ethiopia, Eritrea, and Djibouti as well as Somalia. Poems have always reflected what is happening in society, transported history, negotiated discourses, praised God and the prophet. In Somalia, there is a poem for each and every situation. Elmi says: ‘I grew up with poetry. I write them, my sister writes them, my mother wrote them, they are part of our identity.‘ However, it’s ‘not easy to write classical poetry in Somali because there are only a handful of words which actually rhyme,’ she explains with a wink.

Therefore, the migrant Hibo will not simply reinterpret the poetry tradition for her own purposes. It is open, flexible, mobile, it moves and is moved, flits between genres, disciplines, cultures, societies. ‘Somalis have always been nomads, moving freely from here to there,’ she says. She has no country that she can truly call ‘home’. That is why she moves like water trickling through cracks – unstoppable, and equally impossible to retain.

This lack of attachment also entails freedom, Elmi comments: ‘When you go somewhere else, at first, you’re an outsider. But that also means that you can start all over again and reinvent yourself. And when you meet others like yourself, it can become a strong movement of mutual support.‘ This is how migrants around the world create new cultural trends.

Elmi also wants her work to be understood politically because it illustrates how people shape and reshape their identity in cultures nowadays. How women in societies of the global south must fight for their rights. And how she interprets her own culture and religion. ‚So basically everything I fight for as someone who lives in this day and age.’