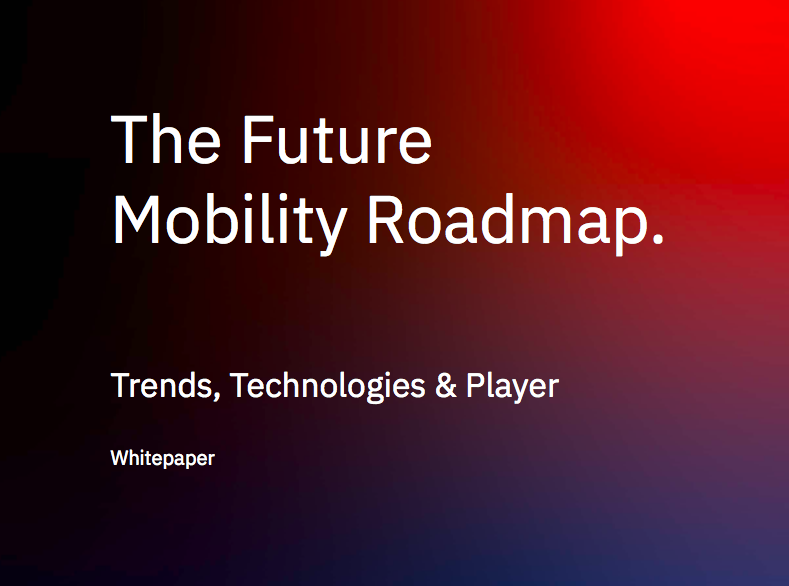 The automotive industry is currently in the midst of the largest paradigm shift in its history – opening up the market for startups and newcomers for the first time. This whitepaper (concept and content by me) examines the changes and latest developments in one of the world’s biggest industries.

When French inventor Gustave Trouvé rolled through the city center of Paris on his “Trouvé Tricycle”, he did so soundly despite the cobblestones. Because Trouvé powered his vehicle with batteries – five years before Carl Benz made it possible for a car with an internal combustion engine to drive for the first time with his “Benz Patent Motor Car Number 1”. However, the low charge capacity of the batteries and charging issues rapidly slowed down e-mobility. The robust petrol engines, on the other hand, allowed people to cruise around the area quickly for miles. In the following 130 years, automobile manufacturers focused predominantly on combustion engines, which they, together with clutches, gearboxes, motor shafts, and other components, developed into highly complex machines.

There are only a few companies today who have mastered this complexity – both technologically and economically. The production of automobiles with combustion engines is expensive, the fixed costs are considerable, and the margins are comparatively low; this makes the market entry barriers high. The automotive industry has thus, up to now, been virtually a private party. In Germany, there has been an oligopoly dominated by the major manufacturers VW, Mercedes, BMW, Audi, Opel, and Porsche for decades. And they have been successful at that. The German automotive industry achieved a turnover of around €423 billion in 2017 – a new record.1 The industry is extremely important for the German economy, around 7.7 % of the country’s total economic performance is directly or indirectly attributable to automobile production. To this day, every fifth car sold worldwide is from a German brand.

Still. But this could change now, as the old hubs of industry may be losing importance rapidly.

After the industry has existed for more than 100 years with virtually no change, it is now in the middle of the biggest paradigm shift in its history. The entire production chain – from research and development through to production including suppliers, dealers, and workshops – is being unsettled by changes worldwide. Cracks are increasingly developing in the formerly large rigid structures. For the very first time, newcomers such as multinational internet corporations, mobility service providers, startups, suppliers or even OEMs (“Original Equipment Manufacturers”) have the chance to gain a significant share of a market that has been relatively closed off for a very long time.

The new players have already begun rewriting the rules. Companies like Uber or the subsidiary Waymo are competing with expertise in the fields of software, digital channels, and services. These fields are more important in the changing automotive markets than hardware, classic engineering know-how, and the aged brand values. The newly positioned tech startups and the new OEM Tesla are used to being close to their customers and collaborating with them – an invaluable asset in the new world of mobility. In comparison, the traditional car manufacturers haven’t really known their clientele well up to now, because their vehicles have mainly been sold by dealers. That has to change now and they should get going as fast as possible, because the new competitors are generally very versatile. Tesla, for example, mainly sells its electric cars online, without the ballast of a dealership chain. Furthermore, newcomers – in contrast to the traditional automobile manufacturers – don’t have to simultaneously wrap up discontinuing technologies such as the diesel engine, but they can concentrate on new and promising technologies. The legacy automotive industry is currently lagging to a large extent: 50 % of companies say they’re a latecomer to digitization.2

There are four trends in particular that are responsible for the described disruptions of the old automotive world:

From hardware to software

The four trends that were described above determine, influence, and accelerate each other. And they fundamentally change the automobile. In the future, it could evolve similarly to mobile phones, in which software and networking have become more important than the underlying hardware components. In addition, in-car software will grow more important than the engine, including horsepower. Accordingly, power in the industry is shifting away from hardware to software providers. The car is becoming a digital platform that combines mobility options and the corresponding demand. And from what used to be a manufacturing industry, a service industry emerges that is helping people get from A to B in different forms.

Focusing on software would also facilitate avoiding the industry’s incredibly long development cycles. For classic vehicle model series, these cycles take six to seven years before a new product comes to the market. The industry reacts just as slowly to changing customer preferences and innovations. In the future, if cars primarily stand out through their underlying software components, they can be updated just as quickly as a smartphone or tablet.

However, unlike mobile devices, it’s not just technological innovations that drive change in the automotive industry. The four trends are also triggered by politics and society; in an increasing number of countries around the world, politicians are ensuring that the auto- motive industry must rethink its processes due to legal guidelines for lower emission limits for CO2 which is harmful to the environment and climate. Manufacturers in Europe face penalties in the billions from 2020 onwards if they do not comply with the relevant CO2 limits. This is hardly possible without electric mobility. More and more countries, from Norway to China, plan to completely phase out combustion technology.

Another factor is the proliferating global urbanization, 55% of the world’s population currently live in cities.13 The proportion is said to rise to 68 % by 2050. The car is still the primary means of individual mobility, with 57 % of all trips in Germany being undertaken by car.14 But in cities, where distances are often short and there are other options to travel, such as public transport or shared mobility, it is only 40% of the trips and this number is decreasing. In urban regions of industrialized countries at least, the motor vehicle could therefore lose significance for private transport. It will no longer be seen as a classic status symbol in the future and the automotive industry itself also believes this.15 Fewer and fewer young adults are completing their driving licenses in Germany.16

The declining interest of Germans in their enjoyment of driving is also a reason for the shift in geographical priorities. Today, the majority of cars are sold and driven in other parts of the world. As the global center of the automotive industry, China must now be considered – and not just as a sales market, but also as a production location. While were a mere 87,000 cars being produced in China in 1970, that number jumped to 28 million in 2018.17 Moreover, the four trends of electrification, autonomous driving, connectivity, and sharing are expected to grow faster in China than in the other major automotive markets, like Europe and North America, especially since the communist government has made this a priority on a political level. China could emerge as the leading market of the transformation.

Mobility and participation for all

In 2017, the automotive industry had a turnover of around €3 trillion worldwide shared between vehicle sales and aftermarket. The radical change taking place currently will not slow this down. On the contrary, it could almost double to €5.5 trillion by 2030. The automotive industry will likely generate around 80% of this amount with the four major trends of electri cation, autonomous driving, connectivity, and sharing, as well as the new business models emerging from there.

The customers also bene t from this as alternative transport systems, such as electric mobility and optimized shared mobility services like autonomous driving, reduce costs for each kilometer driven. The part of the population that has a smaller budget will also be able to pay in small instalments rather than having to spend a lot of money on a car. Above all, autonomous sharing vehicles that are electrically powered benefit the society as a whole. They ensure the mobility and thus the social participation of older individuals, people with physical disabilities, and people without a driving license, including children and adolescents. And since every German driver is stuck in traf c on average for 30 hours a year18 andGermans look for parking spaces in total for 560 million hours a year19, they can now spend this time doing something more meaningful.

The car takes care of itself.

Whitepaper concept and all texts by Florian Sievers